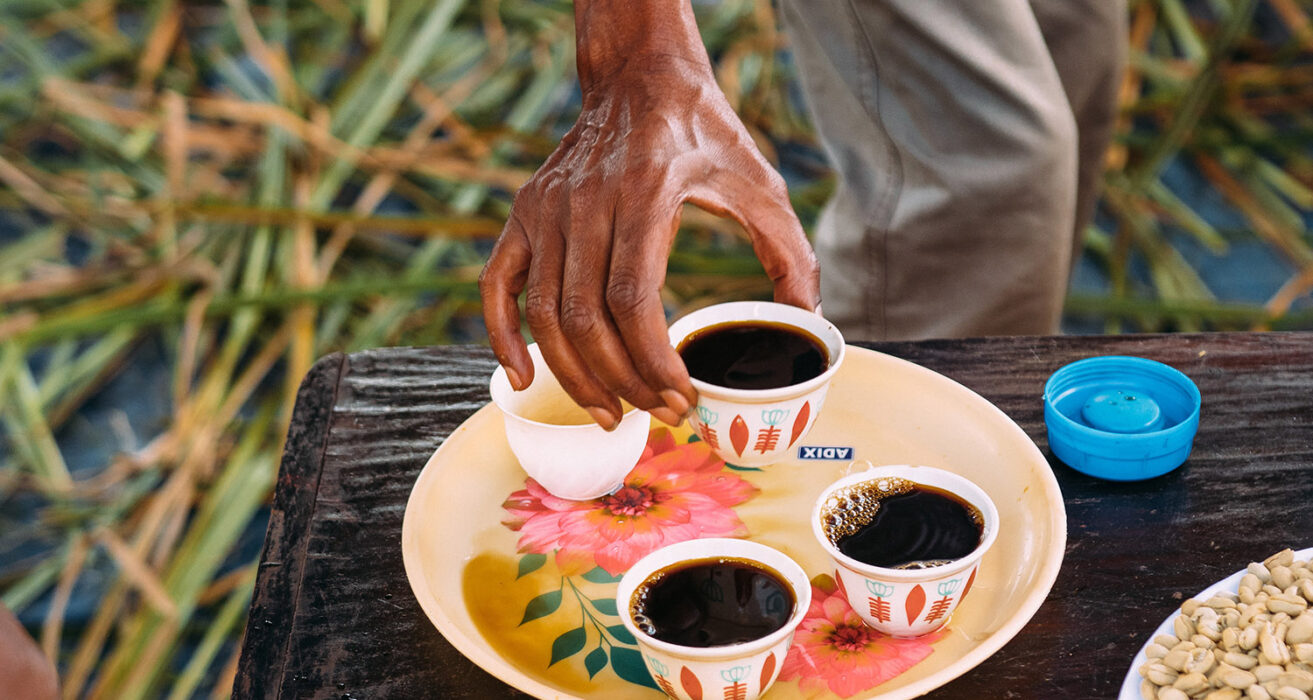 Guji coffee:
Everything you need to know

Guji coffee is everywhere. But it has not always been this way. Over the past six decades, rapid developments, both commercial and cultural, have elevated Guji coffee as a unique coffee region. Making a stark contrast with Yirgacheffe and Sidamo coffees. In this article, we take a deep dive into the history and culture of the Guji people, and the origins of the Guji coffee and its enticing flavor.

Coffee as the constant backdrop in Guji region

The Guji region of southern Ethiopia is a remote place, beautifully forested and – in many ways – an untouched area of the country. A glance outside your window, as you drive through these rural roads, and all you see is lush green forest undulating gently over hills and valleys as far as the eye can see.

Very few urban centers exist in this place, but despite what first meets the eye, the Guji region has seen change over the years, and quite a lot of it in the past five to six decades. Through it all, Guji coffee has remained a pleasant and constant backdrop as the people of this region, their livelihood, and their way of life have all slowly changed.

Guji history – From pastoralists to farmers and beyond

The Oromo of Guji are believed to be descendants of a man called Gujo whose children and grandchildren – tradition tells us – reared cattle in the area. Today, most of the residents of the Guji region are still Oromo people. However, people from other parts of Ethiopia have also settled in parts of the region over the years, many of them coming from more arid areas of the country to farm here.

While the original Guji residents were pastoralists taking care of their herds of cattle, today, less than one percent are pastoralists and cattle herders. Most are now farmers. We covered this transformation in our short-documentary titled, ‘The Story of Guji‘. Only about a tenth of the area’s people live in towns.

The Guji region is excellent for farming. As much of the land was an untouched forest, the soil is incredibly fertile. There is little need for added fertilizer here. As one coffee farmer puts it, “The default here is organic.”

“The default here is organic.”

The mineral region of the south

Guji is also a mineral-rich area of Ethiopia where you can find gold, precious stones, and other sought-after minerals. This is one reason why the region’s coffee potential has only recently come to light. Because of the vast mineral riches in the area, the Guji region was off-limits to non-residents for many years. You couldn’t travel to the region if you didn’t have a very good reason to do so.

As a result, it was difficult for larger coffee farms or washing stations to establish themselves in the area, even though the land (well-watered and at altitudes over 1500 m.a.s.l.) and the climate were perfect to do so. The past few decades, however, have seen restrictions ease and the area opening up.

This, in turn, has paved the way for larger coffee growers and washing stations to establish themselves in the area, thereby giving Guji coffee a fighting chance to earn a name for itself among the other southern Ethiopian coffees.

Coffee History in the Guji Region

Coffee is an inseparable part of the Guji, and the wider Oromo, culture. Some historians believe the Oromo people used coffee as early as the 10th century AD, although it wasn’t used as a drink then. In those times, coffee beans were mixed with edible fat to create small balls that people chewed on to ward off tiredness. It was an ideal snack to carry on long and tiring journeys.

There are a couple of stories in Ethiopia about how coffee was discovered and developed as a drink. The better-known one is the story of the goatherder Kaldi. However, Oromo culture has its own story of how coffee came to be. Here is one version of that:

The supreme being Waaqa (the sky god in traditional Oromo culture) once had to punish one of his loyal servants for a crime. The punishment was death. After the sentence was passed, Waaqa found out that the man was innocent. Unfortunately, it was too late to save him because the sentence had already been carried out, and the man was dead. Filled with grief, Waaqa visited the man’s grave and wept. As the tears from Waaqa’s eyes watered the ground, a new plant sprung up from the ground – coffee. Because the plant was watered by Waaqa’s tears, and not by water, coffee is considered a special plant in traditional Oromo culture.

The Guji people, just like the rest of the Oromo people, have grown coffee in their fields for centuries. Even today, many Guji farmers follow traditional methods to grow their Guji coffee. Coffee is often intercropped with food crops as a means of maximizing land use and providing food for families.

Breaking loose from the pack

Like most areas of southern Ethiopia, Guji is blessed with many regional landraces of coffee. These are varieties that are indigenous to the area, often having grown naturally in the area for decades or even centuries.

Some estimates put the number of regional landraces in Ethiopia at over 10,000 varieties, many of which have not been individually cataloged. Also, coffee growers use hybrid varieties developed by JARC (Jimma Agricultural Research Centre). These varieties are more resistant to pests and often provide higher yields.

While there is no doubt that the Guji coffee profile is unique and separate from Yirgacheffe and Sidamo profiles, there is some debate as to whether all Guji coffees can be confined to a single flavor profile. In general, coffees from this region offer a balanced and pleasingly complex cup profile – perfect for both filter and espresso.

However, the Guji landscape is diverse and some areas are higher than others, others are more forested than others, and there are quite a few microclimates in the region. And, of course, there is the question of which variety the beans come from. All this means that coffee grown in the Guji region can have very different flavor profiles if it comes from different farms or areas, even within the same region.

So, what kind of Guji coffee are you getting

It depends on where in Guji your coffee comes from. Many smallholders grow coffee in their backyards. They usually take their harvested beans to the closest washing station. As most of these small semi-forest farms are in the same general area, they share similar altitudes, soil types, and varieties. As a result, the coffee that comes from that particular washing station will have its own unique profile.

On the other hand, there are now several large coffee plantations in Guji as well. These larger operations tend to be more organized, usually featuring a selection of varieties and standardized procedures to ensure consistency in their coffee. These larger farms have their unique profiles too.

Lastly, another factor to consider is how the coffee was processed. Traditionally, Guji coffee has been available washed or natural. However, you can now find honey-processed coffees as well. This adds yet another dimension to Guji coffee.

Guji coffee in the future

It has not been an easy journey for Guji coffee, from its hidden beginnings to its place on the world stage today. Coffee growers talk of the challenges, as recent as a decade ago, of convincing local farmers that coffee was worth investing their time and effort into on a large scale.

But luckily (and with a lot of hard work), the growing recognition Guji coffee has earned worldwide means smallholders, washing stations, and large plantations now have the incentive to work on their coffee even harder – raising the standards of their coffee as well as the income of all the hardworking Guji people involved.

Where to find Guji coffee

Producers, processors, exporters, and coffee importers flock to Guji because the flavor has made a name in the industry. As a coffee importer, we have worked with Guji growers for over a decade. Sourcing and building relationships that do not feel like a regular business transaction, but lean to deep and meaningful friendships.

The Guji coffee godfathers like Haile Gebre and Tesfaye Bekele are proof and stand at the helm of Guji developments. But younger generations follow suit. Every season we work closely together to find unique Guji flavors. Head over to our online spot, MyTrabocca, list featuring every spot coffee that we have. And sign up for our weekly newsletter packed with essential information about each new spot coffee arrival.

There is often confusion about Ethiopia’s coffee regions, including Guji. People cannot pinpoint where the coffee regions are and to which zone they belong. This is because there is conflicting information or a lack of. The Guji zone map clarifies the structure of this upcoming coffee region. Download the map to navigate Guji’s landscape.