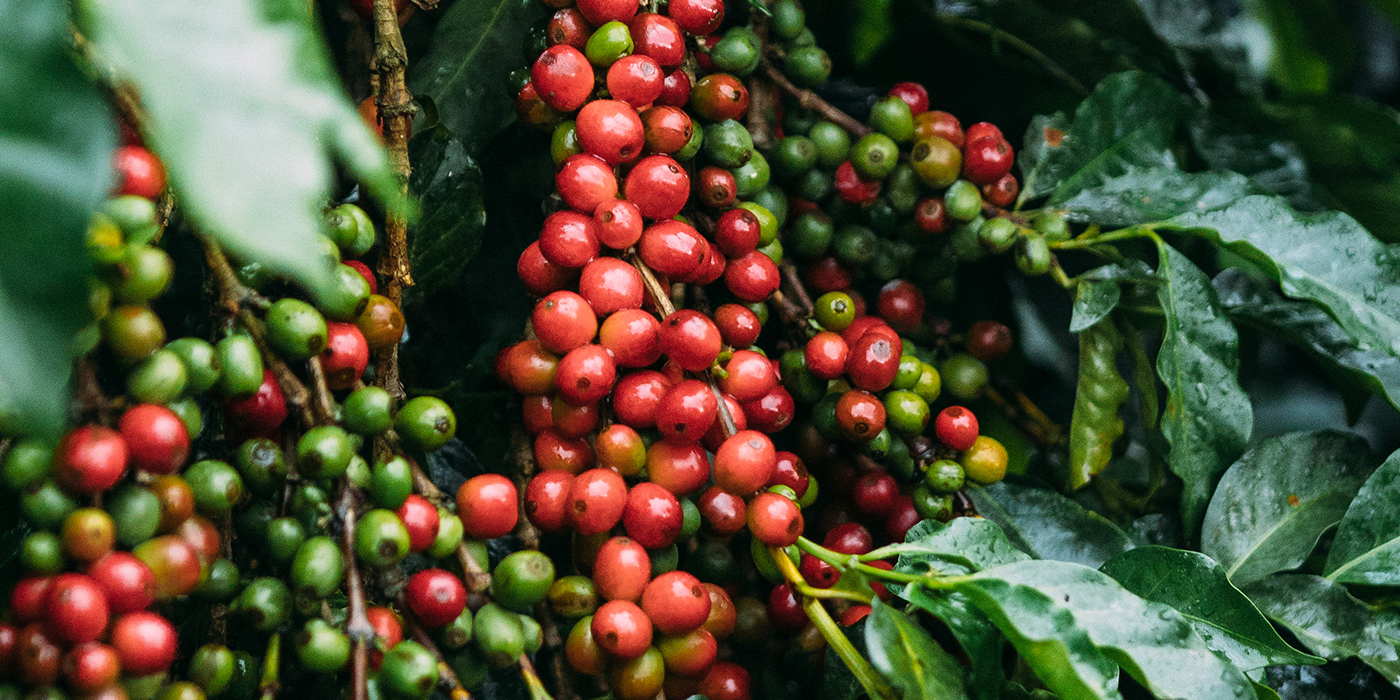 Kenyan Coffee Varieties:
A Comprehensive Overview of The Top Varieties

Learn everything about the top five Kenyan coffee varieties

Coffee made a detour around the globe before entering Kenya. Although coffee’s birthplace Ethiopia is just next door, it took 500-years before Kenyan coffee varieties started to develop their juicy coffee cherries.

In this blog, you will find a bird’s eye view of these top five Kenyan coffee varieties. A short description gives you all the essential information per variety. From botany to yield and quality. But first, we’ll give you a brief history of Kenya’s varieties and their origin.

French missionaries transported bourbon coffee seeds from Bourbon Island (now known as La Réunion island) to the shores of Kenya in the late 1800s. The group of missionaries established a mission in Bura, in Taita Taveta County near Mombassa. From there, the seeds spread across Kenya in the hands of the first Kenyan coffee farmers.

To this day, people refer to ‘French Mission’ coffees when they talk about the original Kenyan coffee varieties. Researchers and Agronomists consider the Bourbon variety as the source of all Kenyan varieties. However, a recent study shows that the famous SL34 relates closer to the Typica variety.

The colonial British government established the Scott Agricultural Laboratories in 1922. The lab personnel gave Kenyan farmers training and technical advice on coffee farming. But developing the SL28 and SL34 remains the lab’s most notable work. To this day, coffee buyers still search for SL28 and SL34 varieties when buying Kenyan coffee. The K7 cultivar was also developed by the colonial government but was selected at Legetet Estate in Muhoroni from the French Mission Coffee.

Severe outbreaks of Coffee Berry Disease and Leaf Rust struck Kenya in the late 1960s. But the Coffee Research Foundation (CRF) in Ruiru, taking over the torch of Scotts Lab’s, responded swiftly and started to develop resistant varieties.

The CRF introduced the Ruiru 11 and Batian varieties to the Kenyan coffee growers. Farmers consider the Ruiru and Batian as a national pride because these varieties came after the colonial government in Kenya. CRF has been renamed to Coffee Research Institute (CRI) in 2014.

Now, let’s dive into the specifics per variety. We have summed up the varieties in chronological order of their releases. First up, the SL28.

SL28 is the flagship of Kenyan coffee varieties. Buyers flock to Nyeri because of the exceptional cup quality and high-yield of the SL28. Scott Agricultural Laboratories selected the SL28 from the Tanganyika Drought Resistant variety in 1931 – a cultivar you can lead back to Bourbon variety. The SL prefix is an acronym for Scott Agricultural Laboratories, and the 28 is the serial number.

Botany and characteristics of the SL28

The SL28 is water stress tolerant because it stems from the Tanganyika Drought Resistant variety. It can go without water for a long time and still bear fruit. This is because the roots of the SL28 go deep. You can even leave an SL28 tree unattended for years and revive it to full production. That is a very unique quality.

The SL28 is a tall statured variety with green, but occasionally bronze, shoot tips. The beans are large, the yield is high, and after two years the tree bears fruit. The SL28 flourishes at medium to high altitudes ranging from 1500 to 1700 m.a.s.l. or above. Agronomists recommend a plant density of 1330 trees per hectare to ensure high quality.

But besides the high cup quality, the SL28 has some downsides as well. The SL28 variety is susceptible (sensitive) towards all major coffee diseases; Coffee Berry Disease (CBD), Coffee Leaf Rust (CLR), and Bacterial Blight of Coffee (BBC). The diseases are a constant threat to Kenya’s most beloved cultivar.

The SL34 variety is very similar to the SL28. The cup quality is outstanding, and the volume output is high. Yet, buyers argue that the SL34 has a slightly inferior quality compared to the SL28.

Scott Agricultural Laboratories developed the SL34 from “French Mission” (Bourbon) variety through single tree selection. But as mentioned earlier, recent investigation tells us the SL34 stems from a Typica-like variety.

Botany and characteristics of the SL34

In the field, you can recognize the SL34 by its tall stature and dark bronze, and sometimes green shoots tips. Like the SL28, the SL34 is water stress-tolerant and has deep roots. But the berries and beans are bigger and heavier than the SL28. It takes two years for the SL34 to bear fruit.

The SL34 cultivar has adapted to a high altitude area, +1500 m.a.s.l., with good rainfall. But here lies the danger. Because the SL34 flourishes in density rich areas, farmers need strict protocols to control the Coffee Berry Disease. Besides being vulnerable to CBD, the CLR and BBC are a threat as well.

The K7 coffee variety is the third successful cultivar developed by Scott Agricultural Laboratories. The output is high, and the quality is good. You can trace the K7 back to the Bourbon variety. Like its predecessors, SL28 and SL34, the K7 is drought resistant. But the K7 has one feature that the other Scott Laboratories cultivars lack.

Botany and characteristics of the K7

The K7 is the only Kenyan traditional variety that can resist some races of CLR and CBD. That is why the K7 is ideal for lower growing areas, from 1200 to 1500 m.a.s.l., where CLR is present. After planting the K7, you can expect to yield cherries after two years.

The K7 is tall and has widespread laterals. The leaves are bronze, with light bronze shoot-tips. The K7 has a more subtle cup characteristic than the acidity-rich SL28 and SL34 varieties. The acidity is mild and subtle, but the body is full.

In the late 1960s, when Coffee Berry Disease and Leaf Rust were everywhere, the Coffee Research Foundation in Ruiru town was tasked to develop disease-resistant varieties. And in 1985 they succeeded with the Ruiru 11. The Ruiru 11 is a composite cultivar of 66 hybrid siblings. In other words, Ruiru 11 has the characteristics of 66 isolines.

Botany and characteristics of the Ruiru 11

The Coffee Research Foundation named it the Ruiru 11 for two reasons. One, the cultivar was developed at Coffee Research Station in Ruiru, hence the prefix Ruiru. The code “11” denotes that it is the first cultivar developed by Kenyans and that it was released from a one-way cross; in other words, it’s an F1 hybrid. The Ruiru 11 can resist CBD and CLR and is suitable for all growing altitudes in Kenya.

Instead of yielding cherries after two years, it can produce after 1½ years. Another feature that farmers love, is the compact growth. This means that Ruiru 11 plants don’t need a lot of room to produce a good yield. Instead of 1330 trees per hectare for SL28 and SL34, they can plant 2500 trees per hectare. The farmers can scale their volumes with Ruiru 11 trees.

Besides volume output, the Ruiru 11 comes with several disadvantages. The cultivar is sensitive to water stress unless grafted on traditional varieties. And the quality is slightly inferior to the SL28, SL34, and K7 varieties.

The Coffee Research Foundation released another disease-resistant variety in 2010; the Batian. The Batian can resist CBD and CLR. But what makes the Batian exceptional, is the morphological features similar to the SL28. In the field, you might mistake a Batian for an SL28. And in the cup, the Batian matches the quality of the SL varieties.

Botany and characteristics of the Batian

Batian is an interesting variety. Because it combines the best of both worlds.

On top of this, the Batian comes into production after 1½ years. The Batian is a tall variety with bronze-green leaves and very large cherries and beans, just like the SL34. If we dive into the lineage of the cultivar, we find that the Batian is a composite of beautiful varieties. The Batian has traces of SL34, SL28, K7, SL4, Rume Sudan, N39, and even the Timor Hybrid.

The Batian holds the potential to become Kenya’s most wanted variety but it’s very sensitive to acidic soils.

If you are a coffee roaster or coffee buyer, sign up for our newsletter

If you are a coffee roaster or buyer and you want the latest news on our Kenyan arrivals, sign up for our newsletter. Every Thursday, we send you news about our latest arrivals and almost sold out batches. You will be the first to know when the Kenyan coffees arrive in a warehouse near you.