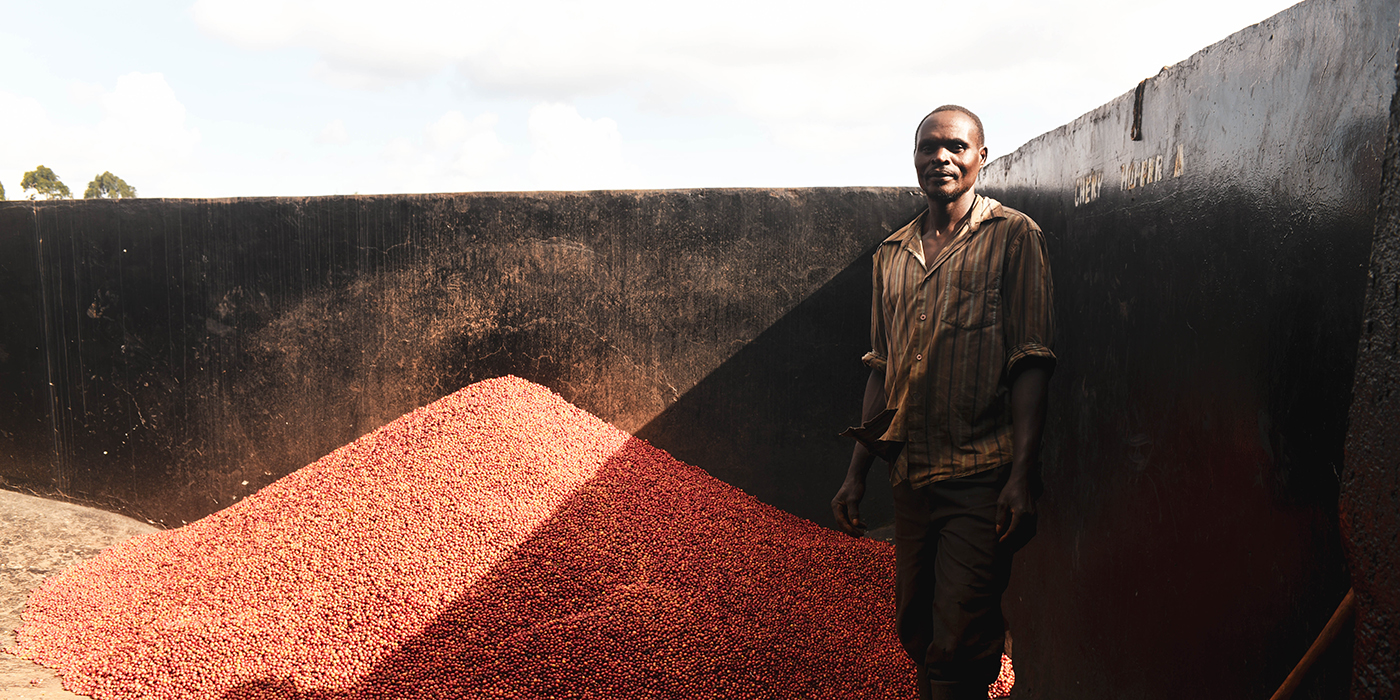 Kenyan Coffee Harvest 2019/2020:
Everything You Need To Know

Getting ready for the new Kenyan crop

Go rinse, polish, and clean your cupping spoons, because the 2019/2020 Kenyan coffee harvest will bring you the best you’ll slurp this summer. The stock and pre-shipment samples gave us a good preview for the season ahead of us. Get set for the arrival of AA, AB, and peaberry coffees in a warehouse near you.

In this Kenyan coffee harvest update, we will cover everything about the harvest of our Ndaroini project. From farmer payments to detailed agronomy plans for the coming three years. But first, we will give you a recap of what happened in 2019.

What happened during the 2018/2019 Kenyan coffee harvest?

In 2019, the 1400-strong Ndaroini farmer group cut its ties with the Gikanda Cooperative Society Ltd. and sold the coffee direct for a record price. Each Ndaroini member received Ksh 100 per kilogram coffee cherries in their pocket; instead of the average Ksh 60 before deductions. The Ndaroini growers called this the Kenyan coffee revolution.

The Ndaroini growers tell their story

With this direct approach, Ndaroini Coffee Ltd. revolutionized the Kenyan coffee market. The Ndaroini growers often use the phrase ‘no surrender’. Heavy words, but choose carefully. The growers say no to underpayment, and yes to a future full of opportunity.

They even created a short documentary that covers the Kenyan coffee harvest of 2019 and the revolution. Hear Chairman Joseph Mukuha and Agronomist Bernard Gichimu explain to you what happened, and what is happening as we speak.

Setting the price for a better future

For the season 2019/2020, we paid the same Ksh 100 per kilogram coffee cherries in April. Still a record price in the Kenyan market. However, the payment came two months later due to the effects of the Covid-19 crisis. Because of the later payment, the Ndaroini growers started to worry and express their concerns on social media.

Growing trust within the community

Rumors started to spread that Trabocca, as a buyer, was backing out or even going bankrupt. As Trabocca, we could only give growers the confidence that they would be paid. After they received the Ksh 100 in April, anxious Ndaroini members started to ease.

But the growers remain skeptical; and rightly so. For years their trust had been tampered with. Even with a 10-year agreement in place, trust needs more seasons to develop.

Taking processing to a higher level

For the 2019/2020 Kenyan coffee harvest, we made several processing improvements. We imported new drying nets and shade nets; with larger wholes for better airflow and shade nets for a slower drying-process. The shade nets allow the Ndaroini to monitor and control the moisture levels of the parchment.

Moisture levels in Kenya, and Ethiopia, are an issue. Most of the time, these levels are way too low, down to 8%. While checking the parchment on the drying beds during harvest, we also noticed that the moisture-meter was 2 to 3% out of calibration. That is why we delivered a brand new moisture-meter that enables the Ndaroini to monitor the levels accurately on a daily basis.

We installed a new Pinhalense Eco pulper at the Ndaroini washing station. It can process a massive 2500kg/hour, which will cover their entire harvest this year. Unfortunately, we just mist the main harvest, from October to January, but the pulper will serve the Ndaroini during this fly-crop; from April to July and onwards.

Making plans to improve the volume and quality

From the get-go of the Ndraroini-Trabocca agreement, we needed an experienced Agronomist. Someone that could connect with and guide the growers to better quality and higher yields. Peter Muchiri, the founder of Rockbern Coffee, introduced us to Bernard Gichimu; an Agronomist and Ph.D. at the University of Embu.

Bernard had the focus and the determination to make Ndaroini coffee even better. In February 2019, just after the Kenyan coffee harvest, Bernard started to work for Ndaroini Coffee Ltd. His first steps were to;

Facing challenges in the field

Early on, Bernard faced several challenges in the field. The farm inputs, like manure and compost, arrived later than expected. The goal was to use the inputs before May 2019 to prepare the small Ndaroini plots for the main crop. But the inputs were distributed later – impacting the yield and quality of several small plots.

A few Ndaroini farmers were slow to adapt to Bernard’s program. They stuck with their old practices until the new methods would prove better. The conservative farmers observed how the yields of early adopters were far higher per tree, then they followed suit.

The cold season, from July to August, was longer than expected. It extended to mid-September. Because of this, the cherries ripened later than the previous year. The short rains also started earlier than usual. This was in the first week of October, after only two weeks of the dry season. This may affect the yields of the 2020 fly crop, but at the same time enhance the yields of the main crop.

Several farmers reported an outbreak of leaf miner; a pest that mines inside the leaves. It caused defoliation and reduces the chlorophyll area. In simple language, leaves fall off the plant or won’t absorb enough energy from the sun. The pest also affects flowering and fruit development and can reduce yields. But fortunately, the reports came early, and the risks have been contained by the special Ndaroini spray teams under the guidance of Agronomist Bernard.

Although the Ndaroini faced numerous challenges in 2019’s harvest, we saw a growth in volume. Because as the news of our Ndaroini Kenyan coffee revolution spread, more farmers revived their interest in coffee farming. The farmer group grew from 1200 to 1400 members, because of the guaranteed and higher payments.

As a result, the Ndaroini volumes grew from 600.000 to 950.000 kilograms of red cherries. Besides more farmers joining the ranks, Bernard’s coffee farming training and spraying programs increased the yields. The installment of active spraying teams even contained the well-known Coffee Berry Disease.

Although most farmers grow the traditional varieties that are susceptible to Coffee Berry Disease (CBD), there was minimal infection within Ndaroini farmers unlike in the neighboring regions. However, a few Ndaroini farmers who failed to follow Bernard’s spraying program suffered significant losses due to CBD.

The plan for the coming three years

As you understand, quality and volumes don’t grow overnight. The Ndaroini supply chain is a long-term endeavor. Together with Bernard and the Ndaroini board, we set out several parameters to measure our long-term success;

Why you should join the Kenyan Coffee Revolution

The growers of Ndaroini teach us one important fact: the Kenyan coffee market is in disbalance. On average, Kenyan coffee growers receive Ksh 60 per kilogram of coffee cherries. This is not a net but a gross price paid to the Cooperatives, not the farmer.

The Ndaroini farmers have turned the table. They set the price together with us; a minimum of Ksh 100 net per kilogram of coffee cherries, for every member. Coffee farmers around the globe need to have a position where they can negotiate the price. That is where we start making coffee better.

This supply chain is a success because specialty coffee roasters, like you, endorse it. Here’s what you can do;