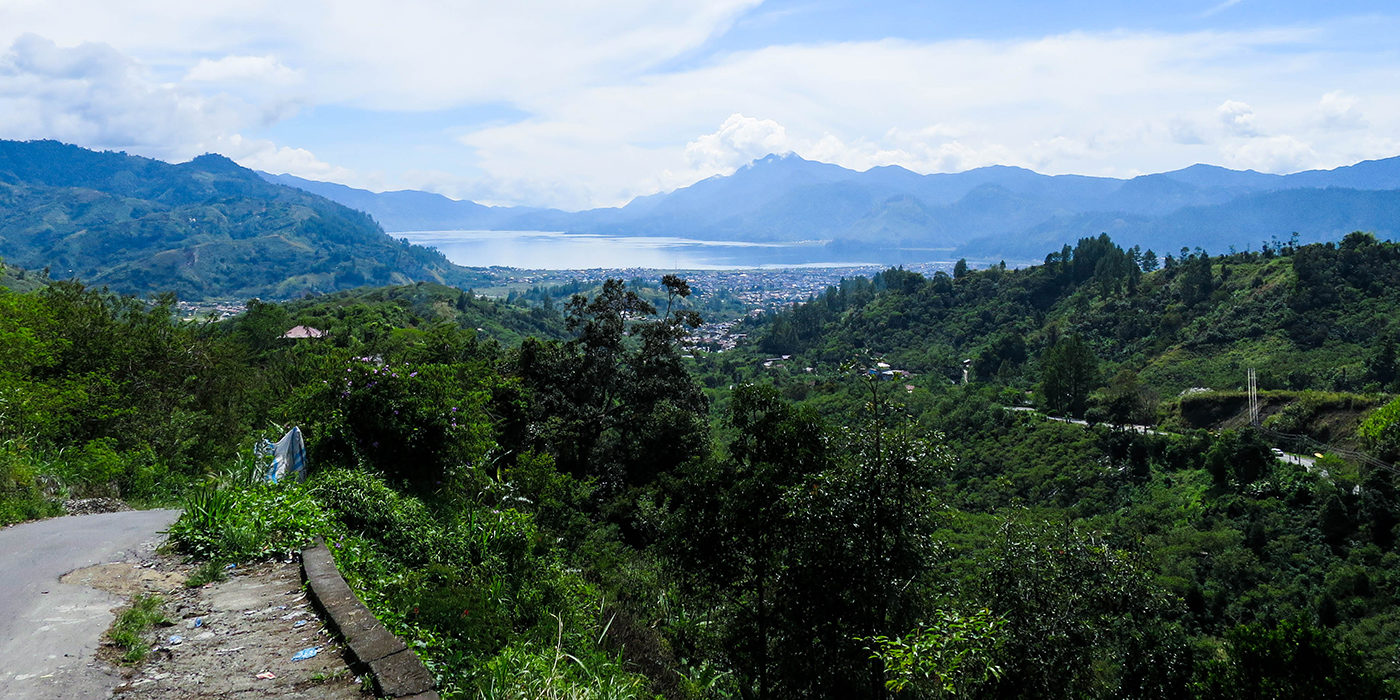 Aceh coffees are earthy, spicy, and often filled with notes of cacao, nuts, and licorice root. During our daily quality cuppings, we notice how these coffees touch an entirely different spectrum of sensory. Layers of spices and herbs unfold while we note down the pleasant thick bodies of these coffees. Sumatra’s hallmark.

The contrast between a sweet Ethiopian profile and an Aceh coffee can be enormous. And yet, we experience that Aceh coffees also offer sweet profiles, but more subtle. Vanilla, orange, and stone fruits are not uncommon notes found in an Aceh profile. The licorice root notes and big body, however, are more easily recognizable.

The landscape of Aceh

Aceh is Geographically diverse. Beaches on all sides, swamps in-land, and at its heart, the Barisan Mountains. This Mountainous range makes up two-thirds of the entire province with Mount Leuser as its highest peak (3381 m.a.s.l.).

A carpet of tropical rainforests covers the backs of these mountains and volcanoes. This volcanic soil is one of the attributes that shape the layered profiles of Aceh coffees. Another remarkable ‘landmark’ is Lake Tawar. Many smallholders that we work with, find a home near the peaceful lake.

Several colonial empires have tried to subdue the Acehnese, but they were always met by fierce resistance. The Portuguese were defeated in 1614, and the Dutch tumbled into a 25-year-long war. Although the Dutch won the Acehnese war (1873 – 1904), resistance continued in the form of guerilla attacks.

After the Dutch colonial rule, the urge for independence was still present. A series of open rebellions, with violence between the army and separatists, eventually resulted in more independence for Aceh.

Despite the violent history, we notice how these events make the Acehnese proud. It shows their unrelenting drive and character to be an independent province.

Aceh is home to the Acehnese, Malay, and Gayo ethnicities. Acehnese is by far the largest ethnic group and is found in the North, surrounding the city of Banda Aceh. The Gayo tribes find a home to the South of Aceh, between the hill of the Barisan range. All three ‘tribes’ have adopted Islam as their prime religion since the 13th century.

The ‘Coffee Regions of Sumatra’ map zooms in on the regions where the best Sumatran coffees grow. The map points out the locations of our prime suppliers, famous landmarks, and departments within Aceh.

As Trabocca, we work with one of the leading Cooperatives in Aceh: The Ketiara Cooperative. This is a women-led movement of smallholders that live in Central Aceh. For years, we have the privilege of delivering their semi-washed coffees to roasters worldwide.