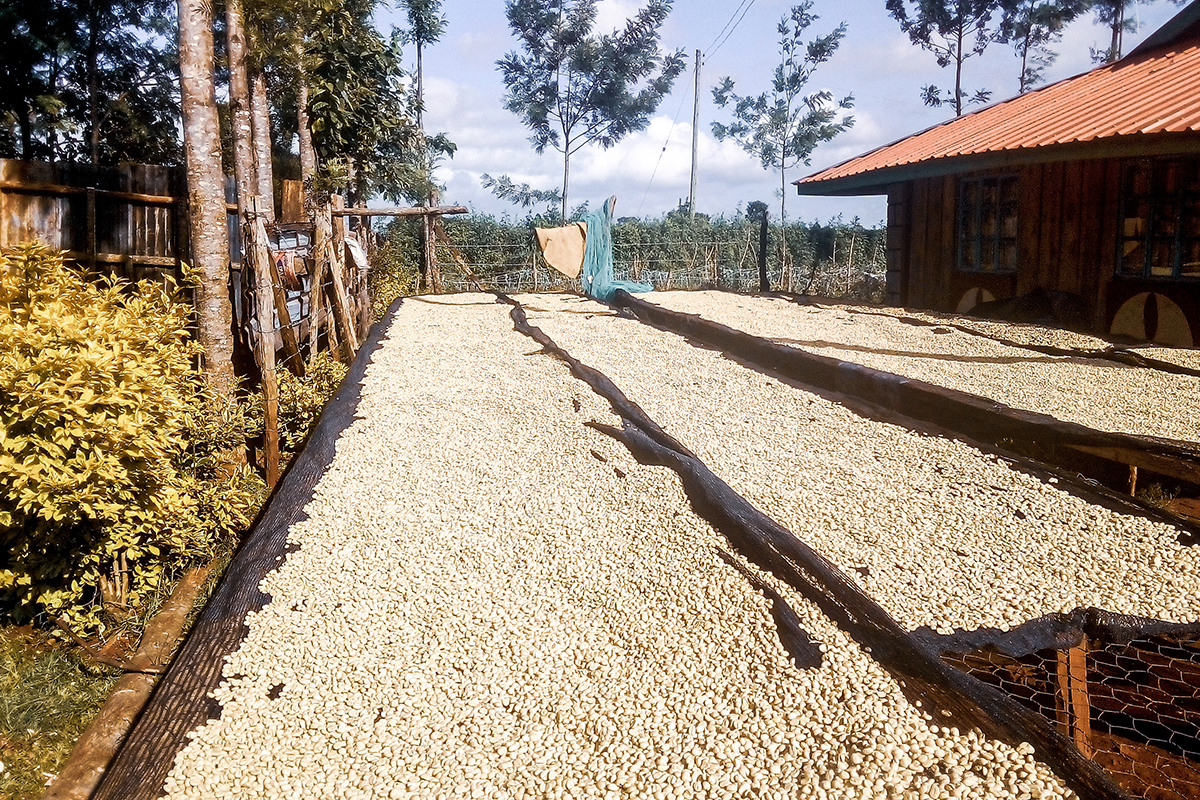 The Kambarare Estate: a shining example for Kenyan youths

With Kenya’s coffee market in decline, Kambarare Estate stands as a beacon of hope. Gerald Njagi, a 28-year-old coffee farmer, is the producer who helms the small estate found on the slopes of Mount Kenya. He’s an anomaly because most farmers within Kiringyaga and the surrounding counties age 50+ or even 60+ and have no successors. This is because most youths who grow up within coffee-growing families move on to more profitable markets, like taxi driving. Although this is an ongoing trend, Gerald has hope for the future revival of coffee in his country. And he’s even keen to play a key role in promoting the industry, “I want to set standards for the Kenyan youths and show them unending possibilities in the coffee sector”, he says.

But before Gerald was pruning his trees and pulping his coffee, we must jump back to 1958: the year Gerald’s grandpa, also called Gerald Njagi, planted 100 coffee trees upon the young estate. Gerald Senior belongs to the first growers who owned an actual farm, instead of being a hired hand to pick the harvests of others. Senior fed his family from the farm’s produce and made sure his kids could take over the business. But before this happened, Gerald Senior attained a great feat in 1998: 5000 trees on his 13-acre plot. When owning more than 5000 plants, coffee farmers can apply for a pulping license. And that is exactly what Gerald did.

While Gerald Junior enrolled for college, Gerald Senior passed away in 2011 and divided the estate among his 8 sons. After graduating, Gerald Junior was keen to follow in the footsteps of his grandpa, father, and uncles. He leased 100 coffee trees and started to help his father pulp all coffees produced at Kambarare Estate. Gerald soon managed the entire process on the farm; from fermentation, washing to drying the coffees. And at the end of his first harvest, the Estate sold 50kg bags for the monumental price of $600. Today, Gerald shares the responsibilities of the Estate with his father and two brothers. As a family, they own 1000 trees, manage operations, and collect cherries from Gerald’s uncles.

The Kambarare Estate attracted buyers, but Gerald argued that the Estate lacked consistency from buyers who shared their focus on quality improvements. Gerald heard about Trabocca’s project with Thiriku and dropped a message in the chatbox. Gerald received an email from Matthew Harrison, Sourcing Manager at Trabocca, and the conversation started. From there, samples were exchanged, and the first cupping of the Kambarare Estate coffees yielded 87+ scores across the table. And Gerald is excited as we are. “I’m optimistic that our relationship will continue to grow,” Gerald says.

What the future holds for Kambarare Estate

“My first year working with Trabocca brought us a record price per kg of cherry. I now see coffee farming as the most profitable business,” Gerald explains. And when Gerald talks about the families’ future ambitions, he says “I want to see Kambarare producing the cleanest cup that Kenyan volcanic soil can produce.”

Trabocca starts working together with the Kambarare Estate.