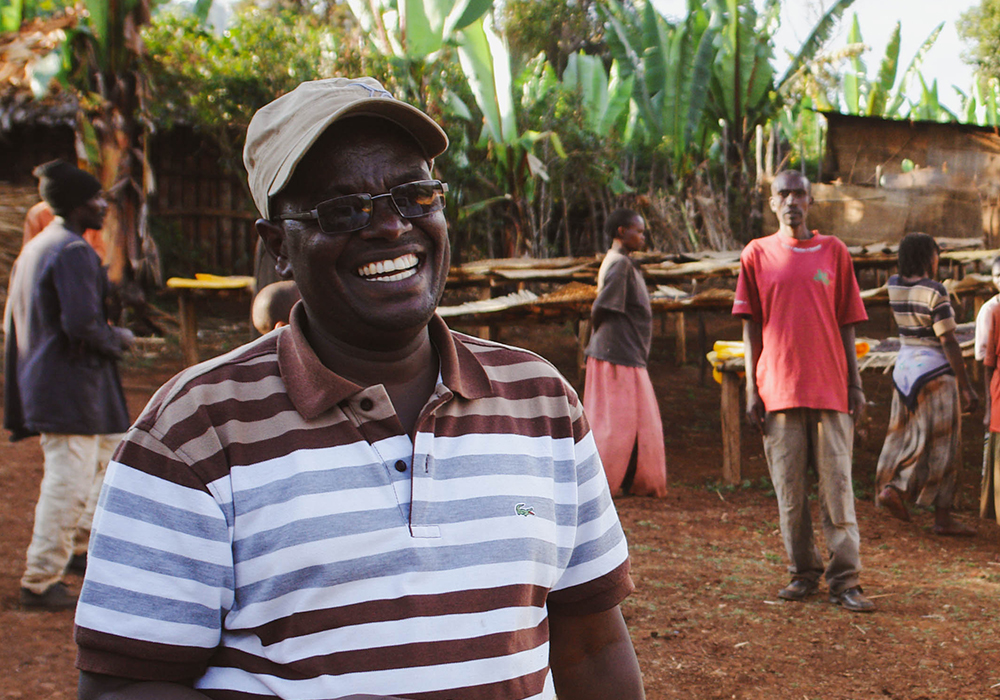 Roba Farm is a unique farm in Yirgacheffe. Unique because it encompasses 30-hectares of fruitful coffee ground, instead of the regular 2-hectare farm you normally find in Yirgacheffe. Besides being a large Yirgacheffe farm, you will also find a well-equipped washing station that can handle 20 metric tons per year. This setup makes the Roba brothers are game-changers in Yirgacheffe.

The brothers, Kefyalew, Bekele, Tesfaye, have always been intertwined with coffee. Father Roba and mother Beratu taught their sons how to grow and harvest quality cherries from a young age. This strong childhood connection with coffee kept the brothers close to the bean. In fact, every brother had the opportunity to study and were keen on using their knowledge in coffee production.

Kefyalew studied forestry, Bekele pursued studies in geography and environment and Tesfaye business management. While studying, they made plans to produce the best Gedeb coffee on the market. In 2013, they took the first step and announced Roba Family Coffee Industry PLC. The brothers grew their coffee-growing terrain to 30-hectares, with the Banko and Raku rivers as natural borders.

Knowledge gave the brothers a head start. Kefyalew brought agroforestry to the table and made sure every inch of their land enjoyed enough shade. Kefyalew used the untouched canopy of indigenous trees for this, but also planted falsa banana plants, cereal, and fruit crops. This is necessary to preserve the ground and to fight soil erosion. The Roba Farm is an oasis of shade and biodiversity.

Within the Roba Farm, you find the Banko Gotiti washing station. Another feature that sets Roba’s quality mark on the coffee. Because the Roba’s own a washing station, they have more control over the entire process during harvest. From picking to bagging the parchment before transport. The Roba’s use the waters of the Banko and Raku rivers to ferment and wash their coffees.

You find the Roba Farm in the Gotiti Kebele which is part of the Gedeb Woreda. The Gedeb Woreda is the most southern ‘province’ of Yirgacheffe. For generations, the Roba’s have called Gotiti home. But Like other parts of Yirgacheffe, the Gotiti Kebele is overcrowded. 12.000 people find their home in Gotiti. Unfortunately, the growth of the population is a problem for the region because it causes deforestation. People cut trees for living space, livestock, or firewood. The Roba’s doing everything to let the forest decide how it grows.

The natural elements of Gotiti

The Roba brothers are proud of the Gotiti Kebele. If you ask why their coffee is great, each brother will boast about the ideal growing conditions of Gotiti. They attribute the success of their coffee to the natural elements; altitude, soil, rainfall, and temperature. All four provide the perfect growing environment for new coffee seedlings and old heirloom trees.

The entire terrain of the Roba’s is found at stunning heights between 1900 and 2500 m.a.s.l. The ideal altitude to grow Arabica coffees. Temperatures range from 21 °C to 29 °C during the daytime, and 9 °C to 17 °C at night. The rainfall in the Kebele comes in two separate seasons; Kermet and Belg. The Gotiti Kebele enjoys the rainfall between June and September, which is Kermet. And the short Belg rain season from February to May, just after the dry season.

Among the natural resources, soil it the most precious and limited. For the brothers, this is the deciding factor for their quality cherries. Soil degradation and erosion is their main concern, for their farm but also the Kebele. “Soil degradation is the most formidable environmental problem, which has been challenging especially the highland parts of the country”, says Bekele Roba.

The flavor profile of Roba Farm

The Roba’s put a lot of effort into their washed coffees, and you can taste this while you cup. Roba Farm produces classic washed Yirgacheffe-1 coffees; clean, bright, and high-acidity profiles. We often note down tastes of sweet herbal, florals, black tea, rooibos, and lemon. The bodies are often medium to light, but this gives the coffee a certain Yirga-freshness that resembles iced tea. The mouthfeel is smooth. A bright Yirgacheffe that can easily be your next special on the menu.